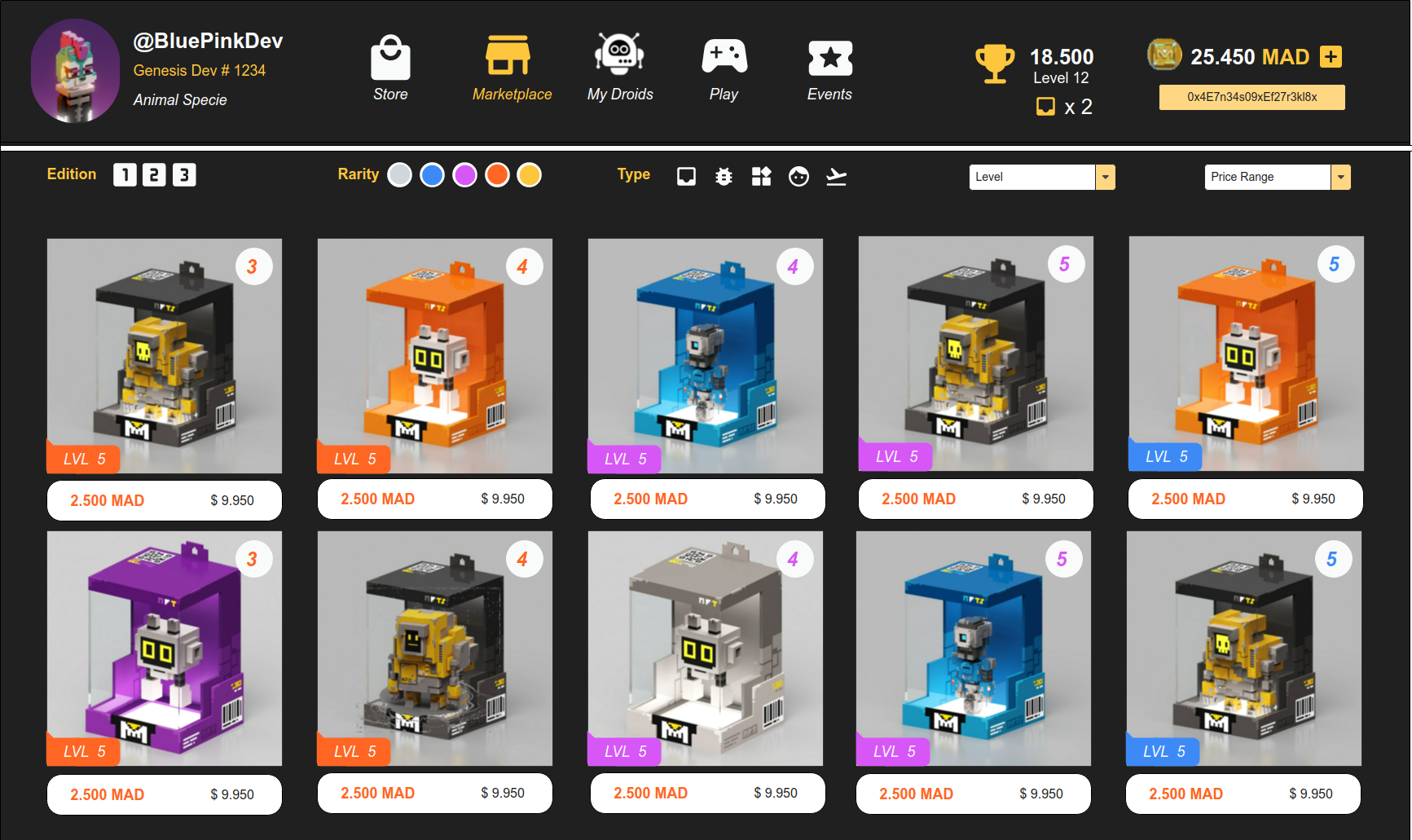 Inside the Mad Droids Platform, one of the key pillars in the Mad Droids ecosystem, contains portals that connect to the Store, Marketplace, Inventory, Game, Events, and more. This platform is designed to help provide everything that the user and player needs in order to interact with every different channel of the Mad Droids ecosystem. Throughout this platform, users will be rewarded for their activities in a variety of ways that allow them to earn in-app credits and points that can be utilized to access different perks and benefits. This is one additional way to incentivize and promote a simple user experience, where everything is accessible in one platform. As the Mad Droids fungible and non-fungible tokens will be on chain, they are able to be easily integrated and used outside of the platform in other places. Examples of this could include other listings and usage on decentralized exchanges, centralized exchanges, NFT marketplaces, games, decentralized applications, and more. 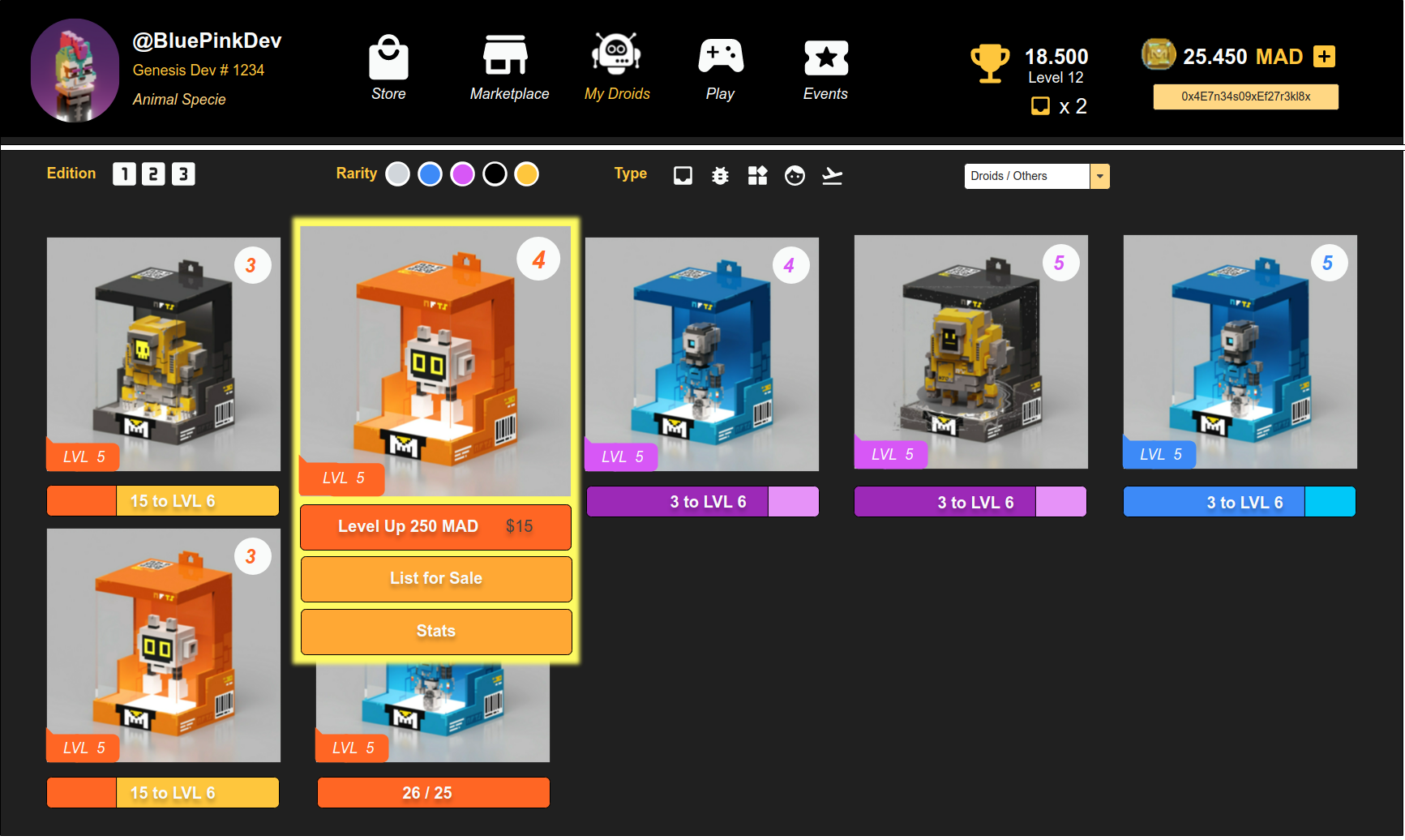 The Mad Droids Marketplace will be the main place to exchange assets, which includes buying, selling, trading, and also renting. Initially, the Marketplace will allow users to browse and exchange all assets that are on chain, including the following NFTs: Developers, Droids, Containers, and Items. Future iterations could include a public marketplace for in-game resources and certificates. In-app credits and points will be non-transferrable and bound to the user's account.

One of the unique aspects about the Mad Droids Marketplace is that it will include a simple dashboard for the individuals or managers looking to rent out or loan assets for a share in yield, acquired in-game. The owner of the Developer NFTs can use a sliding scale to determine what percent of yield they would like to share. For example, this could be 70% to owners and 30% to scholars or 70% to scholars and 30% to owners. This model will allow for the NFT owners to be able to determine the rate that they feel is fair through a simple user interface, which is automated through smart contracts on the backend. Two parameters will need to be set and chosen by the owner, which includes the percentage share or rate and the time frame they are looking to rent their assets for. At any given time, the owner of their NFTs can manually close the contract to revoke privileges and rights to their NFTs. As the owners of the NFTs are taking the biggest risk of value, they reserve this right to cancel the contract. To keep this process as transparent and as fair as possible, rewards will be split based on the rate chosen when the contract was initiated. This allows for some more protection for the scholars or renters, to prevent them contributing their time and efforts for nothing.

Most marketplaces make it so that users incur fees for utilizing their platform. You can see such marketplaces like OpenSea, which charges 2.5% and allows for the owner or creator to set their own royalty rate (%). Other marketplaces, like Axie Infinity, started out at a 4.25% fee. Mad Droids is exploring a 5% Market Fee that will utilize 2.5% to burn both DROID and MAD tokens. If the transactions utilized another currency like ETH or MATIC, at the end of every month will be a buyback and burn. This means that 50% of the total monthly fees of 2.5% will go to buy the DROID token from the public market and then burn them. The other 50% of that 2.5% will do the same process for the MAD token. The remaining 2.5% of marketplace fees will be used to maintain and scale operations. 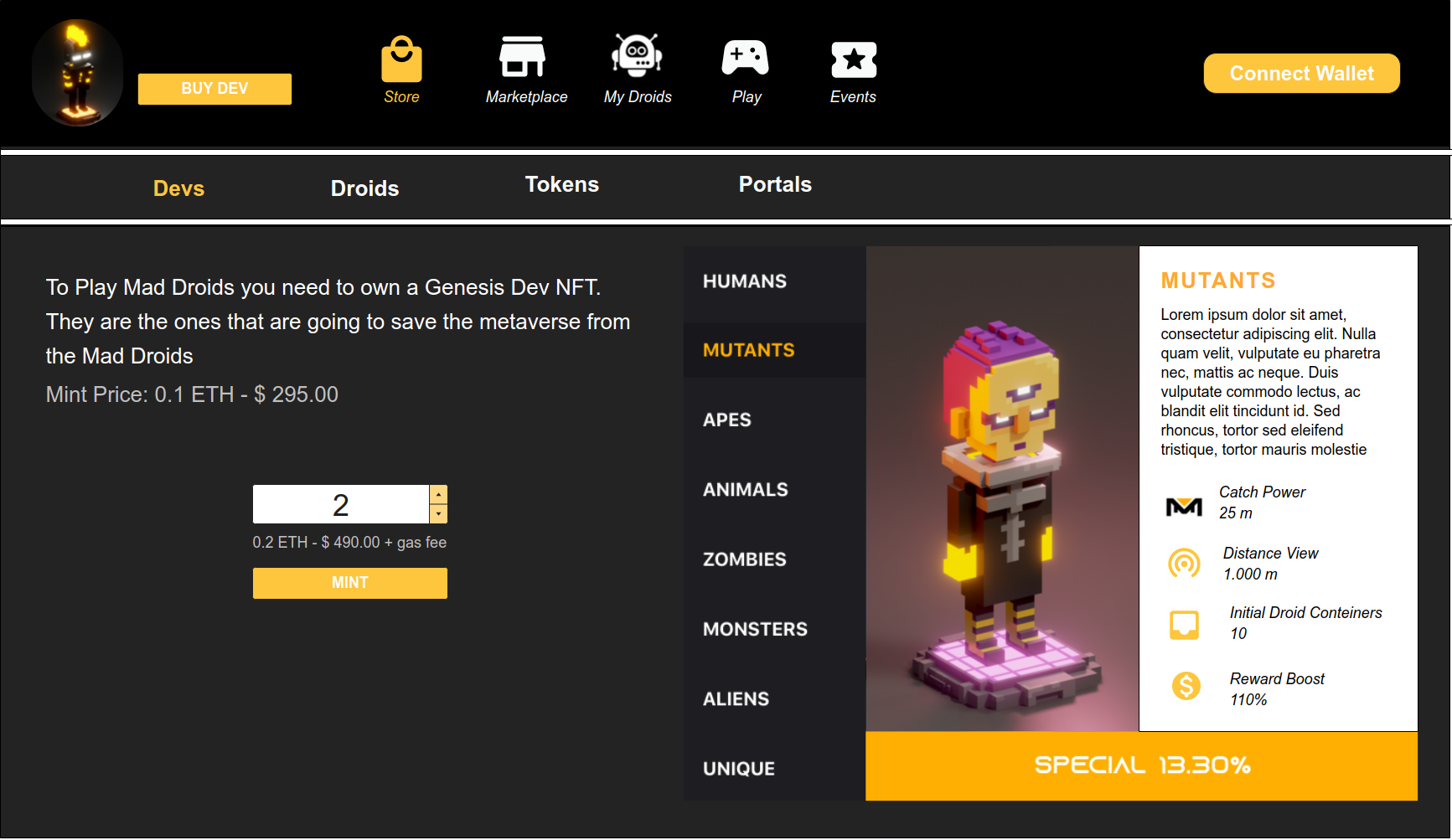 All of the official Mad Droids minting will only take place on the Mad Droids platform (official website). This includes the process of minting for the Genesis Developers, Next Generation Developers, Containers, and other equipable items.

After the Genesis Developers come the "Next Generation" Developers, who will help save the world and Metaverse from the Mad Droids. In order to be able to scale and allow every person around the world access to the Mad Droids Universe, there will need to be way more than 10,000 developers. With that being said, additional developers can be "trained" from the Genesis Developers in a similar way that new NFTs are created through the breeding of older NFTs. This creates the "New Generation" of developers that possess different attributes and metadata that will help determine the future of the Mad Droids Universe and the Metaverse. 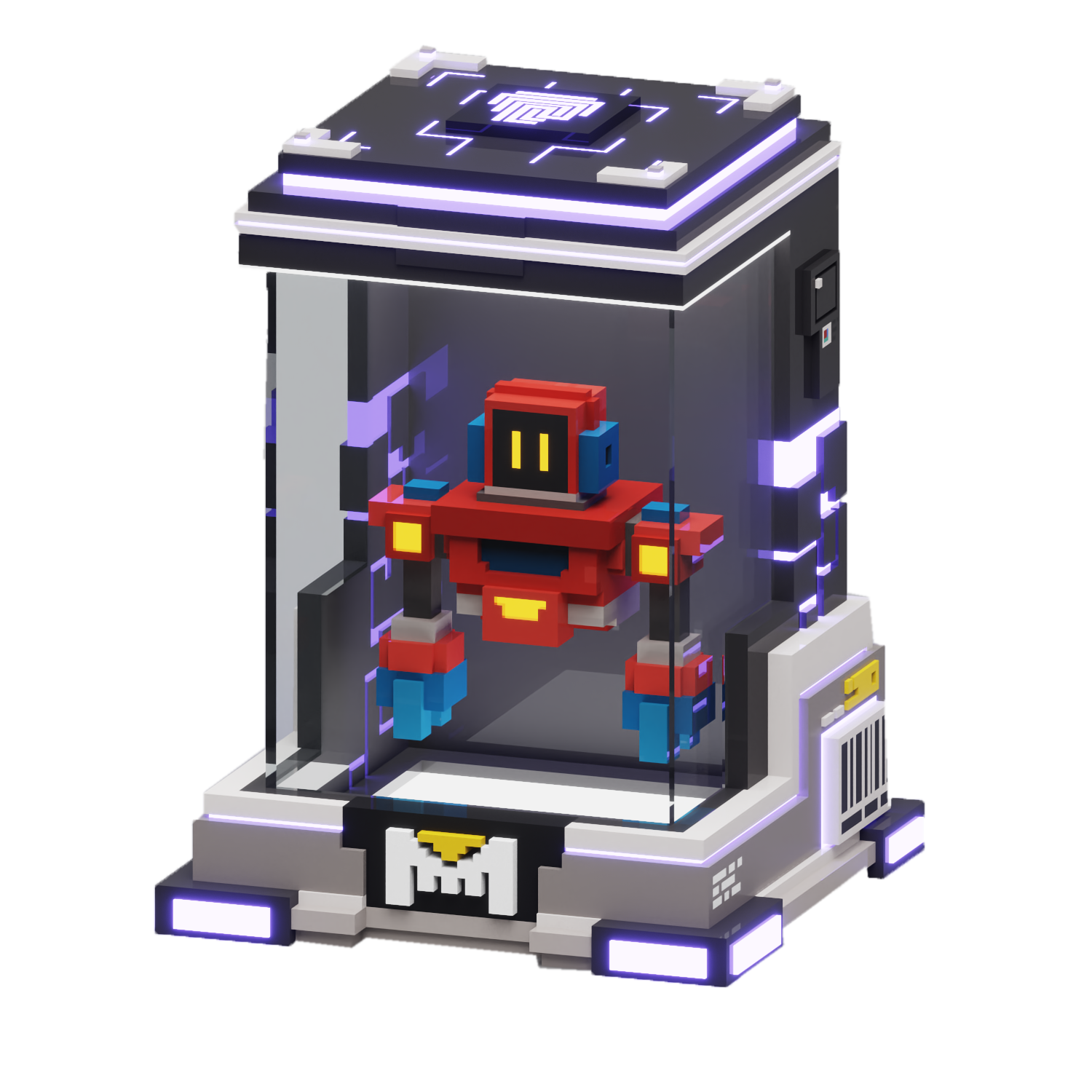 Containers are exactly what you might assume they are—the means in which developers can capture Mad Droids, in order to reprogram them to do good. There will be different types of containers that will need to be utilized for different levels and types of Mad Droids. For example, a Level 1 Container will not be able to capture a Level 3+ Mad Droid. In order to capture the Mad Droid in this example, the player will need to either buy a Level 3 Container or craft it with in-game resources. Each Container will require different resources that can be acquired in-game and then additional MAD tokens will also be needed in order to complete the crafting process. These Containers are also NFTs, which makes them transferable and tradable with other places. They could also provide another potential source of yield for the player. Developers will each have a limited amount of space in their Backpacks to carry these Containers and different Developers possess different attributes, where some can carry more than others.

In the expanding Mad Droids Universe, these Mad Droids are getting smarter and stronger. This means that Developers need to be at least one step ahead. In order to do so, each Developer has the ability to level up, upgrade, and also acquire equipable parts and items. Each one of these items will provide different benefits in-game and specifically in different modes, so that players can customize their Developer to fit their game strategy. As mentioned above with Containers, these equipable items can be crafted or minted with in-game resources and MAD Tokens. As each part is also an NFT, they will be tradable on the Mad Droids Marketplace.

In a traditional gameplay loop or environment, designers and developers craft a logical flow where as the player progresses, they are rewarded along the way and incentivized to get better and level up. This could be anywhere in the form of daily login bonuses to acquiring in-game mounts, once a certain level is achieved. Then the player gets access to a mount or item which grants a movement or speed boost, to reduce the monotony of running around back and forth through a massive online world to complete quests. All-in-all, this wastes so much time for the player and incredibly inefficient in their journey, as well as unexciting gameplay.

To take this one step further than just gameplay, Mad Droids Platform utilizes gamification mechanics in a way to incentivize platform engagement and participation. In-app rewards and points are given, based on different types of interactions, transactions, and participation. There will be rewards (similar to a Quest) for players to mint Developers and at different levels, there will be different rewards. For example, if a player mints 1, 5, 10, or 25 developers, they could earn 100, 500, 1,000, or 2,500 Points.

﻿*Images above of the Mad Droids Marketplace are initial design iterations and are subject to change, as well as all of the content inside.﻿

Updated 06 Jan 2023
Did this page help you?
Yes
No
UP NEXT
Portals (Lands)
Docs powered by archbee