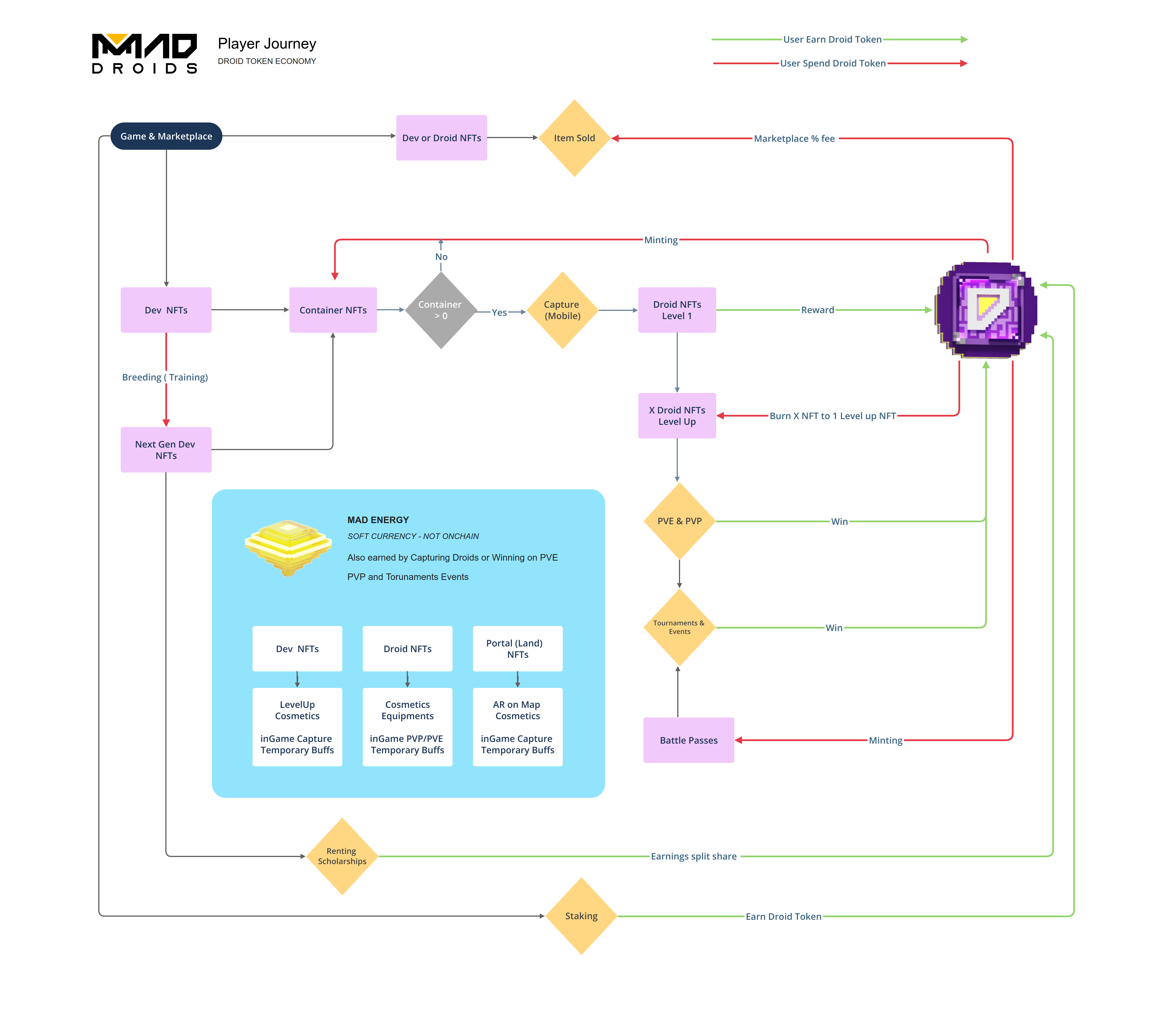 Without the players, what are games really?

With the DROID token, Mad Droids plans to give the power back to the players. These resources and assets are governed by the gamers and can be bought, sold, traded, and used for a variety of ways to empower the player and expand the ecosystem.

At the heart of the Mad Droids ecosystem is the player-owned economy, which is fueled by the DROID tokens.

Mad Droids is looking to build the bridge between game developers and players, as in most traditional models the players' voices are never heard. They put hours and hours into the games they love, often hard earned money used to buy in-game assets, and quite rarely get the opportunity to really give their feedback, opinions, and votes on which direction their favorite game should take. Mad Droids is here to change that by providing the players governance and voting power in specific areas to DROID token owners.

Owners of the DROID token will be able to partake and vote on proposals within the Governance Portal, which can help to influence the direction in which Mad Droids progresses, not only limited to just the game. Mad Droids believes that players should have more power and more of a say in the worlds where they spend so much time and offer so much value.

Mad Droids is unique in a sense that it will be one of the first projects that addresses one of the most critical issues with inflationary currencies in most play-to-earn games and economies, such as Axie Infinity and Pegaxy.

The Mad Droids game incorporates a durability or maintenance mechanism found in traditional, successful games like Farmville and Age of Empires that require a constant upkeep/maintenance or involvement from the players, in order to create a healthy and sustainable ecosystem.

In many traditional civilization games, you have a city that you are trying to expand and grow your population, army, and fortify your base. You get stronger and level up, but since you have more people and buildings you are required to produce more food and resources to feed them, in order to sustain the population to continue to defend and expand your civilization. If you don't have enough resources to feed your people, they'll die and your kingdom will become weaker and more exposed to invasions, which ultimately costs the player more resources in efforts to recover.

A large majority of play-to-earn or play-and-earn games fail because they miss out on this critical component. Their game loop constantly allows players to earn without the cost of any input, only for expansion. Imagine someone buying a car and being able to drive it without worrying about gas to fill up the tank or repairs to fix the car–unrealistic and unsustainable. A car needs constant upkeep in order for it to operate efficiently. You need either gas and power to start the car. When the engine breaks, it needs to be repaired. These same fundamental principles will be applied in the Mad Droids ecosystem in order to strive and allow for a healthy, scaling ecosystem.

Updated 06 Jan 2023
Did this page help you?
Yes
No
UP NEXT
DROID Token
Docs powered by archbee

TABLE OF CONTENTS
Player Journey
Without the players, what are games really?
Fighting Inflation, Defending the Economy